At Least 33 States to Consider Toxics Policies in 2014

This year, at least 33 states—more than half the nation—will step up as defenders of public health. They will take the toxic bull by the horns and consider policies addressing the untested and toxic chemicals in everyday products.

Here's the bull: Toys, clothes, bedding, baby shampoo—all can contain chemicals toxic to the brain and body. We've known for years that the federal law meant to protect us (the 1976 Toxic Substances Control Act) is outdated, allowing untested chemicals and known carcinogens, hormone disruptors, heavy metals and other toxics into the products we use every day.

Although Congress has failed to fix the law, states have established over 200 policies in the last ten years to protect people from hazardous chemicals in consumer products.

2014 is proving to continue this tradition of protection: at least 33 states are considering policies. Some would change disclosure rules for manufacturers, so that concerned consumers will know what chemicals are in their products. Some would phase out the use of chemicals like bisphenol A, formaldehyde and toxic flame retardants. And just a few weeks into some sessions, momentum is strong—like in Washington State, where a bill is already moving to restrict certain flame retardants.

But in state legislatures, taking action really can be like facing down a raging bull. In addition to dangerous chemicals, advocates and legislators have to take on the muscle behind them: the chemical industry which has taken an aggressive approach, spending millions on lobbying campaigns to crush state initiatives.

Hearing rooms will be packed with doctors, nurses, toxicologists, public health officials and parents all testifying to protect kids from toxic chemicals. And on the opposing side, there'll be the chemical industry. Testimony seldom varies: they'll downplay real dangers, gloss over opportunities to build a greener economy, throw out red herrings and do all they can to protect the status quo. And behind the scenes, out-of-state chemical industry checks will fill campaign coffers.

So it's truly a patriotic moment when lawmakers reach across the aisle and pass a law to protect their people. And it happens: most of the several hundred state toxics policies passed with broad bipartisan support, and bills were signed into law by both Republican and Democratic governors.

As New York State Senator Phil Boyle (R-Bay Shore) said: "It's a 21st century reality: we have the American ingenuity to identify and eliminate hazardous chemicals in consumer products. It's the responsible thing to do for our marketplace, our children and our future."

This wave of action, combined with consumer demand, has ripple effects far beyond state boundaries. The laws send a clear message to manufacturers and retailers alike: consumers want to shop with confidence that products are toxic-free. Wal-Mart, Target, Johnson & Johnson—all have pledged action to remove certain toxics from their shelves and their formulas. Soon we'll see that products can be plentiful and profitable—even without the toxics.

And here at Safer States, we'll be watching those state bills to make sure our elected officials are held accountable.

Identification and Disclosure of Chemicals Harmful to Children. At least eleven states including Alaska, California, Connecticut, Delaware, Florida, Massachusetts, Michigan, Minnesota, New York, Oregon and Vermont will consider policy to identify chemicals of concern and require makers of consumer products to disclose their use of chemicals. Some of these policies will include provisions to encourage manufacturers to identify and use safer alternatives in their products.

Bans on Toxic Flame Retardants. At least six states will consider policy to phase out the use of toxic flame retardants, including chlorinated Tris, in consumer products. States that will consider restrictions include Alaska, Illinois, Massachusetts, Maryland, New York and Washington.

Restrictions on Bisphenol A. At least eleven states will consider policy to restrict or label the use of the endocrine disruptor bisphenol A (BPA) in infant formula cans, food packaging, and receipt paper, including Hawaii, Kentucky, Massachusetts, Nebraska, New Jersey, New York, Pennsylvania, South Dakota, Tennessee, West Virginia, and Wisconsin. 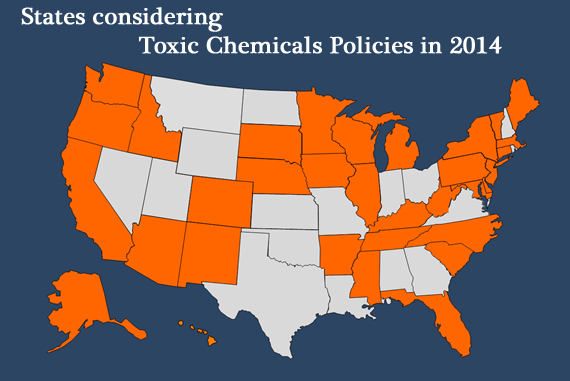